Yesterday I attempted a new recipe.  My husband made some bacon for me.  I typically end up charring the bacon so it’s really his area of expertise ;-)!  I melted some dark chocolate in a double boiler and combined it will some heavy cream.  Then I folded in some slivered almonds.  I poured the mixture into a pan and popped it into the freezer to set.  While that was hardening, I melted some white chocolate in a double boiler and combined it with some heavy cream.  I mixed in the finely chopped bacon and poured that on top of the set dark chocolate mixture.  I put it back into the freezer to set for about an hour.  This is what it looked like when I pulled it out of the freezer and cut them into bars… 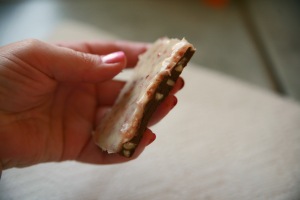 Messy goodness right there!  I have found that most things that are gooey or messy are just so yummy.  This was true of these bars too. 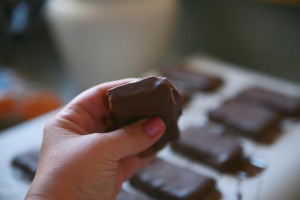 The bacon added the saltiness that complemented the chocolate in such an “oh so good” way.  The almonds added the crunch and light nutty flavor.  The three different chocolates were just yummy together.

Stahrs Cakes supplies the local Layton/Ogden/surrounding Hill AFB areas. I make everything from scratch using the best ingredients. My recipes are time tested. Don't hesitate to ask questions! Take a look around the website. Give me a call (719.482.5308) or email me (stahrscakes@gmail.com) to get started on your perfect cake!

Go to these places for ideas for your cakes!