Can I get a beat?

My 8 year daughter’s drum teacher had a birthday (in October, *gasp*) and his wife wanted a drum set for his cake.  My daughter was so excited because she had to tell me about each drum and what it does and where it’s placed.  To say she was a tough critic is putting it lightly.  The cake had to be perfect.

The cake part was pretty easy…white cake and white icing.  They wanted the drums to be red since it’s the birthday boy’s favorite color.  So I used red fondant to color the drums.  I colored dowel rods with edible silver spray and used edible gold spray on white fondant for the cymbals and high hat. 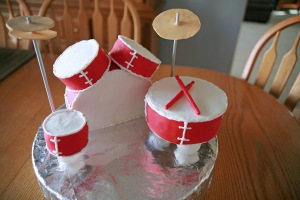 I rolled red fondant around two small dowel rods to make sticks.  The only things that were missing according to my daughter were a china cymbal and a look-alike Peter who should have been sitting on a seat behind the drum set.  Oh if only I would have had a couple of extra days and a few more pounds of fondant… 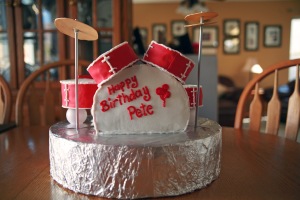 I was pretty happy with the cake and it was a hit at the birthday party.  I hear my daughter is thinking of a set of her own for her birthday!

Stahrs Cakes supplies the local Layton/Ogden/surrounding Hill AFB areas. I make everything from scratch using the best ingredients. My recipes are time tested. Don't hesitate to ask questions! Take a look around the website. Give me a call (719.482.5308) or email me (stahrscakes@gmail.com) to get started on your perfect cake!

Go to these places for ideas for your cakes!